The Seabiscuit Heritage Foundation, a 501(c)(3) non-profit organization, was formed to promote the cultural legacy of Ridgewood Ranch in Willits, California, the home and final resting place of the legendary racehorse Seabiscuit through historic preservation, environmental conservation and public education.

The Seabiscuit Heritage Foundation is dedicated to preserving the remaining 5,000 acres of Charles Howard’s Ridgewood Ranch by restoring historic buildings and conserving the Ranch’s creeks, oak woodlands, old growth redwoods and open rangeland. The SHF is working closely with the Mendocino Land Trust to purchase conservation easements to limit development and protect resources through a permanent deed restriction. The Foundation is collaborating with the National Trust for Historic Preservation, and others, to secure historic preservation easements for the historic sites on the property and to rehabilitate and preserve the Howard family residential buildings, the mare barn and other ranch structures.

The Foundation’s ultimate goal is to create a living museum by continuing Ridgewood’s 150-year history as a working ranch. The Foundation is committed to develop, maintain and expand educational programs that reflect the broad cultural heritage of the Ranch, including the occupation by the Northern Pomo Indians and the development of the land as a working ranch by a succession of owners, including Charles Howard who retired his champion racehorse Seabiscuit here in 1940. The Foundation will focus on recreational and interpretive programs that will increase public access and enhance the understanding of Ridgewood Ranch as a rich historical, cultural and natural resource.

The Seabiscuit Heritage Foundation will carry on the legacy of Charles Howard and the Golden Rule Church Association.

Individuals interested in directly contributing to the preservation and conservation of Ridgewood Ranch should send a donation to the Seabiscuit Heritage Foundation at 16200 North Highway 101, Willits, CA 95490.

The Frank R. Howard Foundation is a non-profit behind the new, $64M state-of-the-art Frank R. Howard Memorial Hospital, an acute general care hospital opening in 2015 in nearby Willits.

The foundation also establishes, promotes and supports programs that maintain, as well as improve, health care for the entire Northern Mendocino County.

Charles S. Howard, Seabiscuit’s owner, and Doc Babcock founded the original hospital almost 90 years ago in 1927. It was built after Charles’ 16year-old son Frank died in a tragic auto accident on the ranch. That was during a time where there were no hospitals to save him. 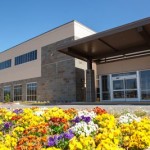 The foundation has ongoing fundraising efforts to finish the hospital campus, senior housing, wellness center, maintain its 8-acre garden that will provide fresh produce to its patients, among many other healthcare programs that benefit the community. 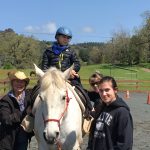 Teaching Riding as an Access to Learning – This story about founder and board member Erin Livingston Holzhauer, is from an article written by the Community Foundation.

Erin [Livingston Holzhauer] has an amazing story to tell – the story of a young 4-H member who dreamt of helping others and then turned her dream into a reality.

Erin loves horses. She grew up riding on the 5,000 acres of idyllic hills and meadows of the historic Ridgewood Ranch. When she was 10 years old, she and friends Aimee Swearengin and Daniel Bartholomew had an idea to “give back” by using this love of horses to help kids who have physical or emotional challenges. After researching therapeutic riding programs, they took their project idea to the Mendocino 4-H and created a program called the “Mendocino County 4-H TRAIL”. TRAIL stands for “teaching riding as an access to independence and learning.”

As Erin, Aimee and Daniel grew older, they left the Mendocino area and continued to gain experience working with people with disabilities. Erin returned to Mendocino County after teaching vocational skills to disabled people in San Diego. Equipped with new technical skills and knowledge, she found a position as the only paid employee of the TRAIL program. Several years later, the well established therapeutic riding program, known today as the Ridgewood TRAIL Riders Association, is continuing to serve young people with varying degrees of abilities. (The Mendocino County 4-H TRAIL is also alive and well, under the “umbrella” of the Ridgewood TRAIL Riders, Association.)

When we were at the ranch, ten-year old Jesse arrived after school for his weekly ride on a horse named “Kiss.” Hold out your cheek or hand for “Kiss” and you’ll discover she is aptly named. Jesse, confined to a wheelchair due to cerebral palsy, was placed on Kiss’ back by volunteers Diane Cannon (board member) and Joan Whitney (“star volunteer”). Joan and Diane were side walkers spotting Jesse as he rode a two mile trail ride loop around the ranch. With cerebral palsy, a person’s muscles are rigid. “We want his muscles to relax,” Erin noted. “The motion of the horse mimics regular walking. You’ll see Jesse hold his legs tight to the back of the horse and then relax as he rides. By the end of the ride, his legs will relax around the horse.”